Over the last two decades, evidence has accumulated for the presence of liquid water on several bodies within our solar system. The Cassini spacecraft has observed aqueous geysers on Enceladus, and more recent data have revealed a subsurface ocean and chemical energy sources potentially capable of sustaining life.  Recent data from a variety of sources clearly indicate that liquid water, considered to be a requirement for life, is not as rare as previously thought, and that if extraterrestrial life exists in our solar system, it is likely to be in the form of extremophilic microbes. Extremophiles thrive in thermally or chemically challenging environments. Of these diverse organisms, the best-studied are the thermophiles. In contrast, the psychrophiles, which are arguably the most likely type to be found outside of Earth, are relatively under-studied; given that an estimated 80% of the habitat available to life on earth is permanently cold (as ocean temperature below 1000 m is 2-4 ◦C), the potential for major discoveries is immense. Life at cold temperatures requires the ability to cope with lowered metabolic activity, decreased membrane fluidity, and the necessity of preventing ice formation within cells and tissues. These requirements lead to adaptations with the potential for scientific and industrial applications. For example, antifreeze proteins are used as an additive to prevent undesirable Ostwald ripening in ice cream.

This project will focus on enzyme adaptations enabling organisms to thrive under conditions similar to those on bodies such as Enceladus and Europa; in particular, we will investigate the adaptations of extremophile proteases, which are universally present in all life forms and are especially useful for laboratory and industrial applications.

We chose five microbes for which the genome sequence was available for each thermal group, enabling us to obtain data on a large, unbiased sample of proteins. A phylogenetic analysis was performed, using 16S ribosomal RNA, confirming that the sample organisms were sufficiently diverse. The presumptive proteomes, based on annotated open reading frames (ORFs), were then processed using our exposure prediction software, molInf. The exposure for each residue in each protein was classified as either buried (0) or exposed (1) based on a 20% solvent accessibility cutoff. This was then used to calculate a protein-normalized log ratio of exposure for each amino acid type. These ratios are plotted in the graph below and ordered by exposure rates. 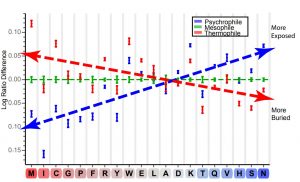 The trend of the plot is consistent with expectations of residue exposure rates, where charged and polar residues are more exposed, while hydrophobic residues are more buried. Some particular examples illustrate the types of hypotheses we can develop using this methodology. One noticeable trend is that both Cys and Met, which are some of the most commonly oxidized amino acids in proteins, show an increased exposure as the thermal environment of the organism becomes warmer. Many thermophilic proteins are stabilized by disulfide bonds to increase protein thermal stability. The cytosolic environments of some thermophilic organisms are less strongly reducing than those of mesophiles. This lower reducing potential promotes disulfide bond formation at the expense of making cellular components more prone to oxidative damage. It is hypothesized that the increased exposure of these sulfur-containing amino acids serves as a passive sponge for the more prevalent reactive oxidative species in the less reducing cytosol of thermophilic organisms. There is even an example of a Met-rich peptide that is produced in response to oxidizing agents and can be targeted by a sulfoxide reductase. To date we can find no direct data on the redox state of the psychrophilic cytosol; however we hypothesize that reduced disulfide bond formation allows psychrophiles to tolerate a more reducing cytosol. This in turn would allow for less reliance on Met and Cys as passive antioxidants, resulting in their increased burial in accordance with their hydrophobicity.